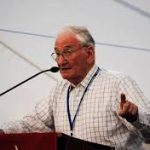 Myles and his wife Joan ran a Prayer Group in their home for over a decade. From this they founded the Prince of Peace Community in 1985. That same year, Myles attended the Lion of the Tribe of Judah, Catholic Conference in Ars, France. While standing at the famous statue of the Cure d' Ars, Myles said to the Lord “This is France what about England?” Immediately came back the words “New Dawn, Walsingham”. Two years later by the Grace of God, the first New Dawn Pilgrimage Conference took place in the fields of Walsingham facing the Shrine, attracting over 800 pilgrims and various national / international speakers. New Dawn is now not only one of the largest Catholic Pilgrimage Conferences in England and Wales, but also one of the largest in the world attracting up to 140,000 in Uganda alone!   In 2009, on our return to Edinburgh from the New Dawn Pilgrimage Conference in Walsingham, my wife Margaret and I felt that the Catholic Church in Scotland would enjoy such a conference. 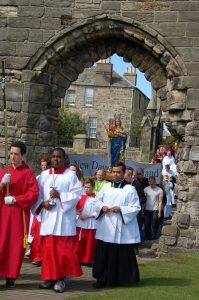 St Andrews became the obvious choice to hold a Scottish conference as it mirrored Walsingham in ecclesiastical importance to the Catholic church in Scotland. St. Andrews was next to Walsingham as a place of pilgrimage in pre reformation times and shared a similar fate at the hands of the reformers.   New Dawn in Scotland is part of a worldwide association of people who desire to display the Catholic church in all Her splendour. We are Eucharistic centred, Sacramental, Marian and Spirit Filled. Our 5-day conference has just celebrated its 12th year.   From the very start of the our Scottish Conference we have adopted our National image of Our Lady, Our Lady of Aberdeen. She is always displayed at the Conference and is carried on our Rosary Procession. Our replica of the original 1490 statue shows Mary presenting to us the body of her son and a bunch of grapes representing His Previous Blood. She is truly a Eucharistic image. Douglas Hunter, Director of New Dawn in Scotland